I’ve just come back from one of the best holidays of my life.

It’s hard, really, to convince yourself to go elsewhere when you’ve admittedly caught the Florida bug (I FREAKIN’ LOVE DISNEY/ORLANDO)- but I’m so glad we did because there are just so many places that I want to see in the world!

So we went to Rome last time we headed Italy way, and it was a fantastic place. It’s a great city to go to if it’s your first visit to Italy – there’s so much to see and do and everyone is super friendly.

Because we were feeling a bit more acquainted with the Italian way of life, we decided we’d try our hand at travelling around a bit for our second trip. Why see one place when you can see four? That kind of thing. And we headed out on 11 days of adventure!

And because we did so much, I thought I‘d split this into four blog posts. So without waiting around any longer, may I introduce you to Venice…

Venice is one of those places that I’ve always dreamt of visiting. The fact that this city is totally waterlogged is just fantastic and makes it an exceptionally unique place. It stole my heart as soon as I spotted the water, and I think a little piece of it stayed there.

We decided to pay extra and get a hotel actually on Venice, and it was worth it. Arriving to the city via boat really was a special experience.

Our hotel was called the Carnival Palace, and it was a modern hotel with great facilities. Our room was pretty big and decorated in beautiful blacks and golds – with the only downside being that we were woken by the bins being taken out at 6am every day we stayed there. I guess it’s the price you pay for such a clean place.

I won’t recap everything we did at each city we visited, ‘cos we’d be here forever, but I will discuss my top 3 favourite tourist spots.

It was actually Museum Corner at St Mark’s Square that was my absolute favourite tourist spot in Venice. They had some amazing exhibitions on, my favourite of which featured a TONNE of precious gems and stones, one of which had been sculpted into the shape of a dragon. These precious pieces were created by Buccellati, the jewellers, – and they gave me a fantastic idea for my new novel.

It was fun, of course, to bask in other art that was in the Museum Corner. And one of the things that struck me was the juxtaposition of modern and traditional art mixed together. One spot had a series of videos of people holding their hands up with inspiring messages written on them amongst traditional sculptures. I was transfixed by it.

As it turns out, I’m quite the modern art fan. 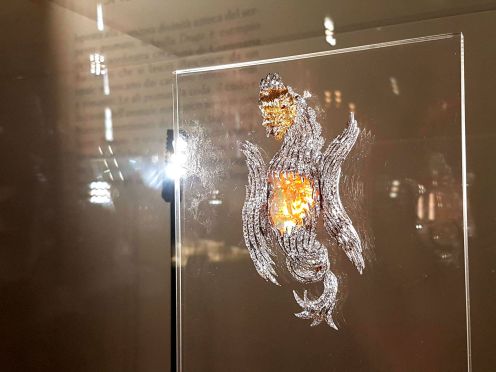 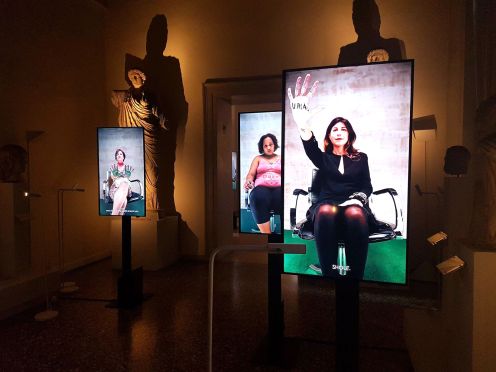 My second favourite tourist spot was the Peggy Guggenheim Museum. Modern art was the key theme and we arrived to find it lovely and quiet – which sadly didn’t last long. But why it did, we managed to have a look around a temporary exhibition being hosted there in peace.

Mark Tobey’s Threading Light is something I wouldn’t have expected to enjoy. But I was blown away by it as me and my fiance stood there trying to figure out what it all meant (we were getting pretty creative by the end of it). Tobey’s paintings, on the surface, look like a load of jumbled colours and lines mixed together, which sounds terrible, but it really was moving. I’d recommend you go take a peek if you’re going to Venice soon. Sadly, the exhibition ends on the 10th of September. I wish I could show a photo of what we saw, but pictures weren’t allowed.

After exploring Mark Tobey’s work, we headed into the main heart of the gallery. Sadly, troves of school children also arrived at the same time which meant the whole experience was actually kind of stressful.

We saw a cool Andy Warhol piece featuring white flowers which we really liked, Pete in particular warmed to this as he’s a fan of Bowie, who’s a fan of Warhol. And after that it was really hard to enjoy the work surrounded by loud school children filling in worksheets.

We did find a really nice bit outside through, which lead down to the water. There was an amazing view, the sun was shining, and it was a joy watching the boats go past.

With such negative comments up there, you’re probably wondering why this museum reached the number 2 spot. Well, that’s because I was really was moved by the work there – despite the noisy atmosphere. Plus, getting to see a piece by Warhol, and discovering a new artist that I like, was pretty special.

The view from the Peggy Guggenheim museum.

You’re never short of palaces, galleries and basilicas to view in Italy, but Doge’s Palace really is a special one.

We’ve taken to calling it Doggies Palace because we have no idea how the name should be pronounced, and it was super fun to explore. There was no queue, but we already had tickets anyway, and the rooms inside were simply breathtaking. The amount of time spent decorating palaces like that isn’t worth thinking about, but the effect is delightful. It was also fun to explore the old books on display in the library room – I’m a sucker for them!

But the elaborate decor gets old quite quickly. By the time we came to the end of it all I felt desensitised to the artwork – already feeling like I’d seen everything the place had to offer. But there’s another side to Doge’s Palace which is great for exploring, and that is the jail.

The first thing you do is head down some stairs and across the Bridge of Sighs. This is the bridge they used to lead prisoners across that had been convicted of crimes moments before, and they would sigh as they took their one last view of Venice below.

Below that were the jails which were fun and creepy to explore. Now that I think about it, we seem to wander around a lot of prisons on holiday. San Francisco’s Alcatraz, I’m looking at you. But I’d recommend heading to this tourist spot because it gives a taste of what life used to be like in Venice, and history really is something to be marvelled at. 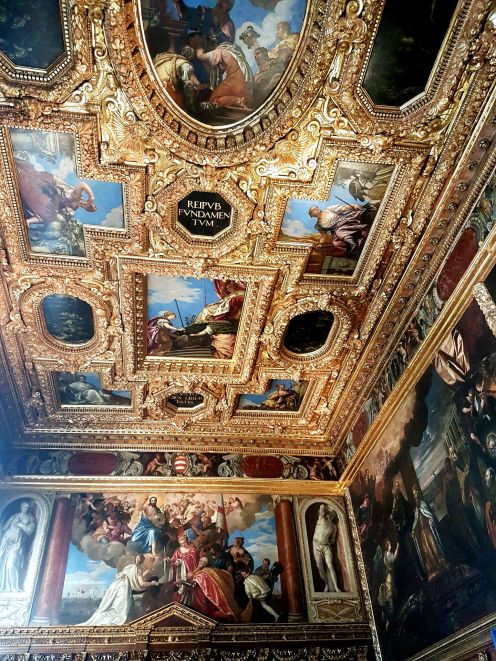 One of the beautiful rooms at Doge’s Palace and the view from The Bridge Of Sighs.

So, as you might have guessed, I really adored Venice. The sound and smells of the water were truly exquisite (I could have sat outside waterside all night). If you’ve been umming and ahhing about whether to visit this breathtaking city, I have just one question for you.

What the heck are you waiting for?!

The next blog I will do in this series will be Florence. We may have a break in between so you guys don’t feel totally overloaded with travel blogs.

And if you did actually make it to the end of this, congratulations. Give yourself a pat on the back and it’s ten points to Slytherin – ‘cos that’s my Hogwarts house and everything. Also take this gold star for being flippin’ awesome. 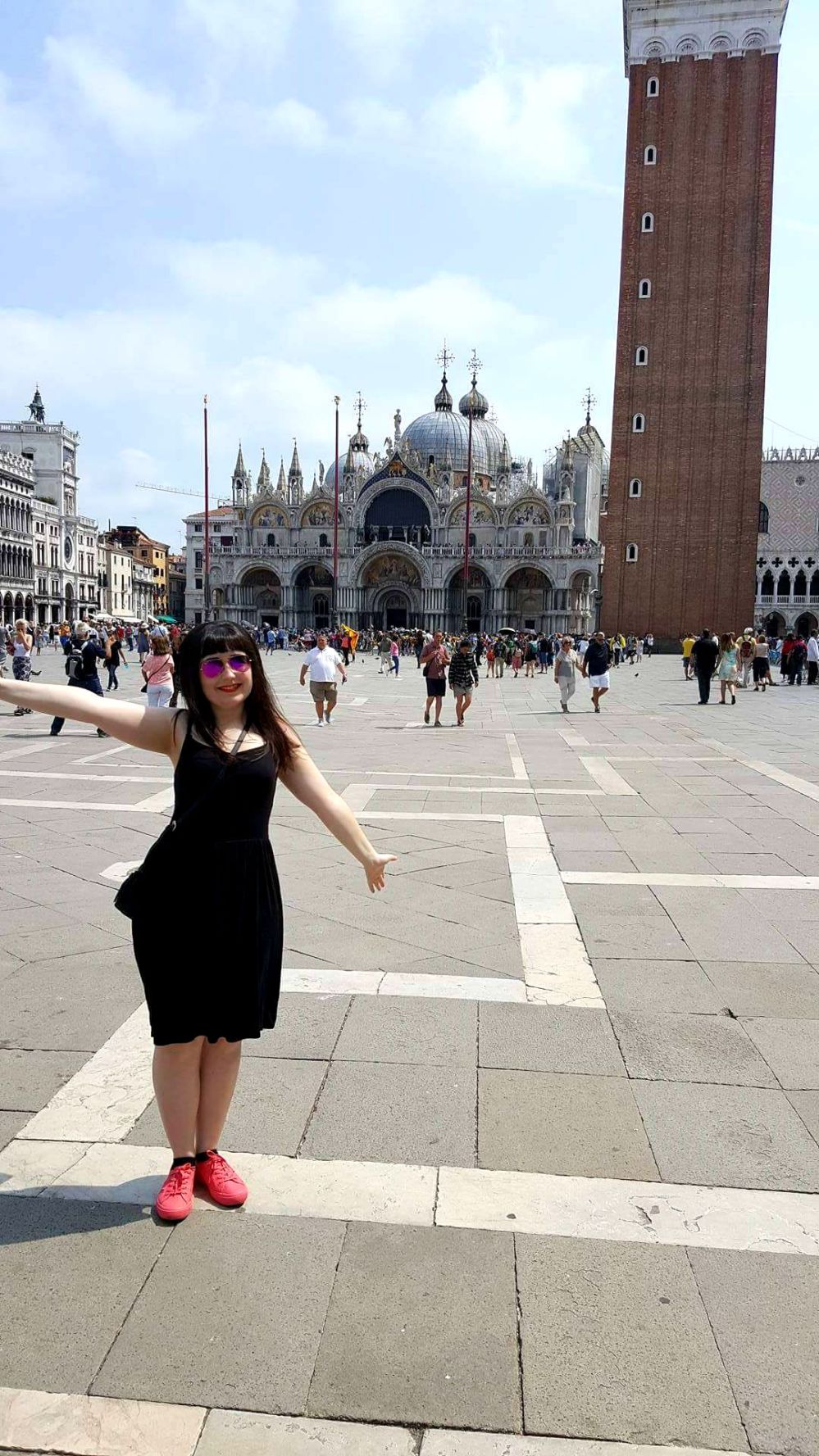 Me outside of St Mark’s Basilica. A much more impressive view from the outside than in.